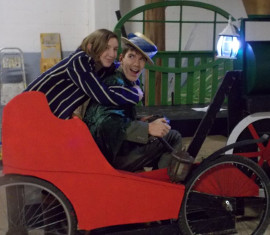 Sixteen-year-old Grade 11 student Paul Greenfield has taken on a major role in this year’s Kids in the Meaford Hall production as none other than director of Kenneth Grahame’s Wind in the Willows.

Paul played the scarecrow in last year’s Wizard of Oz. This year, he is directing a cast of 17 fellow students including his siblings Franz in the role of Mr. Toad, and Misha in the role of Rat.

Kenneth Grahame’s classic children’s book was published in 1908 and has become an all-time favourite among children of all ages. Tales of the wealthy and obsessive Mr. Toad; his friends Mole, Rat, and Mr. Badger; and the mice, rabbits, weasels, and hedgehogs of the Wild Wood that the author wrote as bedtime stories for his son continue today to delight children of all ages.

Meanwhile, Director Paul Greenfield is putting the cast through its paces. Backstage, the wardrobe team is adding the finishing touches to the costumes and the props team is working on an elaborate set that includes a boat, train, car, and gypsy caravan, according to producer David Baker. “The production is in good shape,” he said. “We have had our first rehearsal on stage. The actors will be dressed in full animal costumes with face make-up rather than masks. The props are coming along. The challenge could be how to store a boat, train, car, and gypsy caravan off stage during the productions. That and the timing - we are limited to 90 minutes for the children’s performances because of the school bus schedules.”

Previous Kids in the Meaford Hall productions have included ’Twas the Night Before Christmas, Alice in Wonderland, A Christmas Carol, Robin Hood and the Golden Arrow, The Lion, The Witch and The Wardrobe, Aladdin and The Wonderful Lamp, The Grinch Who Stole Christmas, and The Wizard of Oz. As in the past, the Wind in the Willows production is being funded through grants, sponsorships, private donations, and ticket sales.

Photo Cutline: Kids in the Meaford Hall actors Misha Greenfield and her brother Franz Greenfield take one of the stage props from the upcoming Wind in the Willows production for a test run in the Scott’s Clay Products building, where props are being built for the December 6 and 7 performances. Tickets for the December 7 evening performance are available at Meaford Hall box office ($15). Photo courtesy of Kids in the Meaford Hall.