If a proposed redevelopment of downtown buildings on Sykes Street is realized, the core of Meaford's downtown business area would look very different. “That would be a shame,” says local artist Anne Evans, who worries that Meaford could lose part of its heritage to a demolition crew.

The proposal moved Evans to begin work on a new painting of the buildings Meaford could lose between 35 and 47 Sykes Street.

“I feel very strongly about saving the front of the buildings,” Evans told The Independent. “If you take the time to look at them from across the street, it's mind-boggling the work that was put into that brickwork. You can't possibly get it in a painting, it's too intricate. I think it's as valuable as a treasure.”

The 91 year-old artist has lived in Meaford for nearly 30 years. Born in Nottingham, England, she came to Canada in in the 1940s, settling first in London, Ontario. In her nearly 70 years in Canada, she has seen many changes, and not all of them for the better. While she understands the need to build for the future, Evans would like to see the building façades saved, no matter what is constructed behind them.

This isn't the first time Evans has been concerned about the possibility of losing a piece of Meaford's heritage - several years ago she was involved in the effort to save Meaford Hall from potential demolition. In 1999 she was honoured as Meaford's Rotary Citizen of the Year, in large part due to her contributions to the preservation of heritage in the Meaford area.

“It's like destroying a major painting,” says Evans of the demolition of historic buildings.

“I know it might be expensive (saving the façades), and I know the buildings need to be repaired because they're falling down at the back, or so they say,” Evans admits, but she notes that other buildings in Meaford, such as the Stedman's building, have been renovated and preserved, and she is hopeful the same can be done for the buildings not even a stone's throw away.

“What really amazes me is Stedman's. They had theirs redone, and it's beautiful. They did a wonderful job,” said Evans.

Evans, who herself lives in a home that was built in 1867, is nearly finished the oil on canvas painting, which, even with her decades of experience, was a challenge given the intricate brickwork.

“I almost gave up many times,” she says with a laugh.

Evans hopes that her painting won't become a final tribute to buildings about to be torn down, and that local residents and building officials can work with the developer to find a way to preserve the building façades.

Even if you don't know who she is, you've likely seen some of her work. Her local projects have included the design for the Paul's Hotel mural at the corner of Sykes and Trowbridge Streets, and book cover designs for St. Vincent: A Beautiful Land, andPictorial Meaford. Internationally her paintings can be found in private collections, including the Queen Elizabeth II Windsor Castle Collection. 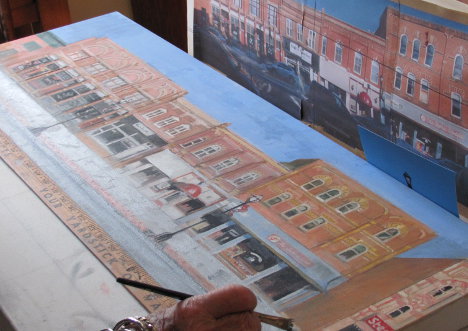