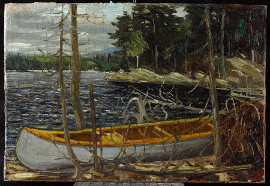 When you have a chance to walk with history, seize it.

Recently, my interest in the saga of Tom Thomson - arguably one of the most iconic residents of Meaford and Grey-Bruce - has been seriously piqued.

Most of you are likely to know the basics of the story. Thomson's body was found in a lake in Algonquin Park in July of 1917, as his reputation as an artist was rising. The discovery came a week after his distinctive canoe was found overturned.

It was a tragic end, as it seems certain he would have been a founding member of the Group of Seven, which formed three years after his death.

For years, rumours of a cover-up have persisted, indicating that Thomson - who grew up in the Leith and Annan area in Meaford - was murdered.

An impressive list of suspects has been suggested for the deed, although convincing evidence has been slim.

In 2010, Roy MacGregor published what, so far anyway, is the definitive treatise on Thomson's death, and came to the conclusion that not only was Thomson murdered, his body was never moved from its original burial at the Canoe Lake (or Mowat) Cemetery in Algonquin Park.

According to traditional lore, Thomson's body was disinterred from the remote cemetery and transported back to Owen Sound where it was reburied in the family plot in Annan.

That was thrown into doubt immediately by the accounts of various witnesses at the scene at the time, and those whispers were proven to be well-founded in 1956 when a group of men conducted a completely unsanctioned exploration of the cemetery.

They discovered a body matching Thomson's description, including a head wound, but it was subsequently 'officially' determined to be that of an unknown man, likely aboriginal, despite no records indicating such a burial.

While writing Northern Light, MacGregor put that conclusion under serious scrutiny, by enlisting a forensic specialist to do a reconstruction on the skull of that man, based on photos taken in 1956.

The results were spectacular. In the book, MacGregor describes the moment of seeing the reconstruction results by saying, "I was looking at Tom Thomson."

Being somewhat familiar with the park, and intrigued by the story, my wife and I recently decided to take a couple of days to follow the 'Tom Thomson Trail', a journey we saw suggested online.

Luckily, our visit corresponded with an official presentation of the 'Tom Thomson story' by park staff, which further caught our attention. 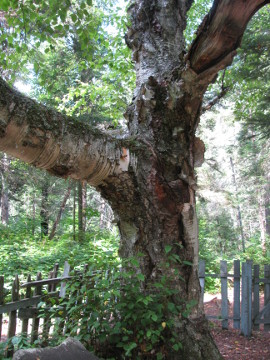 Park staff members discourage anyone visiting the Mowat Cemetery, although they don't forbid it. Following the 1956 antics, it's understandable why they do so.

The warden told the audience that the cemetery was very difficult to find, despite repeated questions, and instead encouraged people to visit both the cairn erected in Thomson's memory on Canoe Lake, and to take in the replicas of his work (and that of the Group of Seven) that have been turned into murals in the historic downtown of Huntsville.

The cairn was erected by several members of the nascent Group of Seven and Thomson's art patron. It is accessible only by paddling Canoe Lake from the well-known Portage Store.

Not surprisingly, the reticence of the park warden on the location of the cemetery merely whetted my desire to see it. Thanks to the Internet - where you really can find almost anything - it didn't take me long to find walking directions to the graveyard, although that was a fallback plan. 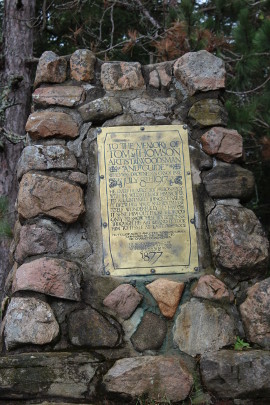 We had planned on following in Thomson's legacy by paddling the lake, but our first attempt was stifled by the congestion on the lake. Literally hundreds of people were renting canoes on a hot and sunny September morning.

After chatting with staff at the Portage store, who were helpful while also subtly trying to discourage visits to the cemetery, we decided to check out the walking directions.

"It's a very long walk," one person told us.

"You're supposed to get on the lake from here," another told us, evidently placing a strong value on the store's near-monopolistic access.

The directions we had turned out to be bang-on. The walk down some side roads was approximately four kilometres, and not challenging in the slightest except for the excessive heat.

We followed the roads right to the narrow trail leading to the cemetery, which was less than a ten-minute walk.

Located on a ridge, the cemetery materialized out of seemingly nowhere in some heavy bush that appeared to be second or third growth... with the exception of the largest white birch tree I've ever seen.

The massive birch has been a constant at the cemetery for more than 100 years, having been a mature tree when Thomson was buried.

Most birches have a lifespan of perhaps 30 - 40 years, which makes this Methuselah a truly remarkable specimen, and a fitting tombstone for Thomson and the two other people buried in the graveyard.

The ambience of the cemetery is eerie, with a faded and dilapidated grey picket fence in serious disrepair surrounding it. Two headstones are still legible, while a third is not.

A white cross marking the spot where Thomson's body was believed to be originally buried, lies outside the fence. We paused to silently honour the dead, before leaving to make the return trip. Aloud, I asked "Tom, what really happened to you?" but of course there was no answer.

All told, we spent a bit less than two hours finding the cemetery.

The next day dawned rainy and gray, and we decided to head to Huntsville to do the second leg on our quest, the murals in its downtown.

There are more than 30 of them, many depicting Thomson's famous works such as the Jack Pine and the West Wind. We spent a pleasant couple of hours in town, locating them all and becoming reacquainted with the early development of Canadian landscape painting.

Finally, on our third day, despite some adverse weather, the congestion of boats on Canoe Lake eased significantly, allowing us to hit the water in a canoe.

Using Thomson's favourite mode of transportation resonated with us, as we thought it only fitting to re-trace his steps in the manner in which he travelled.

Despite a map, the cairn commemorating him proved to be somewhat elusive, but we soon found it on a ridge that overlooked the lake, along with a totem pole erected in his honour. The cairn was erected on a favourite campsite of Thomson's and it wasn't difficult to feel his spirit there.

We soon left the site, due to deteriorating weather, and headed back to the Portage Store.

After retracing his steps, do I have a better appreciation of his work? Absolutely. Do I believe he was murdered? Yes, I believe he was. Is his body still interred on the shores of his beloved Canoe Lake? Yes, I would say it is.

In the end, though, does it matter? His mysterious death has only added to the allure of his legend. Only the Thomson family could end the swirling speculation, and there appears to be no appetite for that.

Now, I wait for the park and the family to mark the 100th anniversary of his death in 2017 in some fitting manner.