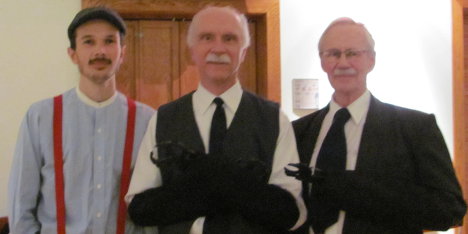 Meaford Community Theatre’s production of Andrew Gawley: the Man with Steel Hands debuted at the Meaford Hall on Thursday night to an appreciative sold-out audience, and continued with subsequent performances Friday, Saturday and Sunday.

The locally written and produced play, made its world debut here in Meaford, after much hard work by many of the local theatre leaders. The production, written by Deputy Mayor and amateur playwright Harley Greenfield follows the life of one of Meaford’s most unique citizens.

Andrew Gawley, as many long-time locals will remember, was a man who suffered a tragic accident early in his life, which lead to him fabricating hands made of medal, thus giving him the name, ‘the man with steel hands’. Throughout his life, as the play chronicles, he encountered many obstacles, and suffered many trials, but overcame them all to live a positive, fulfilled, and respected life.

Greenfield wrote the play based upon his own life experiences, as well as conferring with others who remembered him, and conducting research on the local man. The play went through a couple full re-writes to lead it to the finished product that hundreds of locals had the pleasure of viewing.

The Meaford Community Theatre organization (MCT), accepted the play to function as its 2014 spring play. The organization has historically been responsible for 2 productions annually, one in the spring, and one in the fall, since its beginning in 2010.

This is the second one to be both locally written and to have the plot based in the community. The first being Harvest Moon, which was presented in 2011, and was written by local Greg Brown about Meaford near the turn of the 20th century. The past two spring performances have been the highly entertaining The Whole Town’s Talking, and the dramatic Marvin’s Room, which were both well received. But it was clear that the Meaford audience enjoyed the return to a local storyline.

The play is a biographical journey through the life of Andrew Gawley. With the beginning and ending having the setting of his funeral, this creates a serious, reminiscent mood. Then, the majority of the play transfers from an elderly Gawley discussing his life events with a reporter, to these life events being played out centre stage by a younger version of himself. We see him touring with Ripley’s Believe It Or Not, operating his own shop, and interacting with other residents throughout his entire life.

This backdrop created an intriguing blend of being informative and entertaining; at once educating the audience about the man, and amusing them with the interesting stories and characters.

Besides the incident in his youth, Gawley had to wade through many different obstacles. His kind and generous nature lead him to several unfortunate incidents where people misunderstood his generosity.

One example of this was when he allowed a woman and her young daughter to live with him due to her husband’s abuse and alcoholism. She soon became his cook and housekeeper, and the two shared a close bond for many years. However, those a part of his Christian circles felt this was inappropriate, and demanded that he release her. Gawley however, relied on his own personal convictions to know that what he was doing was the right thing for him, and those opposed were not permitted to decide his life’s doctrine. The play manoeuvred through these storylines with ease and charm.

The three actors who played Andrew or ‘Andy’ as he was better known, all did a good job of interpreting him at that certain time in his life. Jaden Calvert as Young Andrew displayed him as a young man full of dreams, with no idea of what the future would hold. Richard Prazmowski portrayed Andy throughout most of his life, truly displaying the heart of this man. Garry McEachern played Elder Andrew, reminiscing about his well-lived life.

The entire cast did a great job of paying homage to his life through their character. Whether that was Kyra Keith playing a reporter, Connie Kellner-Miller as Mary Sullivan, or writer Harley Greenfield himself playing George- everyone used their roles, many rather small, to form a beautiful overall picture.

A play of this nature can have a great cast and script, but is little without the audience to support it. This production had that in spades, drawing a large crowd for all four of its showings. Thursday night’s performance even had the special addition of having relatives of Gawley in the audience, which the producers were thrilled by.

One thing that was particularly refreshing was the genuine feel of it all. It did not seem like the script was trying to build his life into something beyond what it was. The truth was enough. And although it probably wouldn’t have made it in Hollywood, it was a perfect play to showcase this past Meaford resident, for today’s Meaford residents.