Locals Learning to Heal With Cannabis 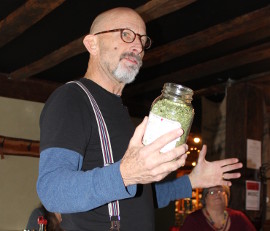 There appears to be no lack of interest in uses for medical marijuana locally.

Nearly 50 people jammed into a meeting room at The Barn Co-op on Saturday, January 21

to take in a presentation by members of Mother Earth's Natural Design (M.E.N.D.) on how to prepare various cannabis-based remedies such as tinctures and foods for their own use.

The presentation was led by Fred Harris, who has been using medicinal marijuana since 2012 to help alleviate prostate problems. He's one of the leading advocates for the medical use of cannabis in the area.

M.E.ND. is a Facebook-based group with approximately 1,000 members, Harris and his panelists said.

"We connect people to the medicine," he stated. "We don't sell products, we want to teach you how to grow the plant and prepare tinctures, butters, etc.

"Everybody here can make this stuff," Harris added. "But you've got to do your research and start slow."

None of the simple products actually use the bud of the cannabis plant, which is most commonly associated with its narcotic effects, he said. Rather, the medicinal products use clippings and other leftovers from the plant.

The idea, he explained, is to take a whole-body or holistic approach to healing. While smoking cannabis is the fastest way for people to feel the effects, M.E.N.D isn't a supporter of it, as it doesn't impart the full benefit of the controversial plant's healing powers.

The idea isn't to get high off the medication - although that can happen. Instead, Harris said the group believes the healing qualities of the plant are best accessed via ingestion.

The plant is particularly good for chronic pain, and is also useful for a wide variety of other treatments, including glaucoma, Harris said, although scientific studies are mixed on that question.

The tinctures - or extracts - are typically used in teas, Harris told the group. A cannabis-coconut butter is also a common product, and can be eaten on its own or used for cooking, such as brownies. Typically, it can take a couple of hours for the effects to be felt after eating cannabis-infused products, although the tinctures work somewhat faster.

The exceptions are cannabis-based oils, which are intensely narcotic, as well as full of healing qualities. The narcotic concentration in the oils can reach as high as 95 per cent, making it the most useful for fast relief from chronic, intense pain.

"This stuff will knock you on your ass," he warned. "We don't show people how to make oils in public sessions."

Oils require the use of higher-quality cannabis, including the buds, Harris said.

Harris said the products are also useful for cancer treatment, although he plainly said cannabis doesn't cure cancer. Rather, it prepares the body to help fight off cancer cells, he explained.

The panelists fielded a number of questions from the audience, primarily about how to separate the narcotic effects from the medicinal effects.

One audience member, who described herself as an enthusiastic recreational user in her younger years, mentioned how she has taken an interest in using the plant for various medical disorders she's suffering from. So far, she said, the process had been relatively successful.

Photo: Fred Harris shows off some of the ingredients of the medicinal marijuana products he makes during a presentation at The Barn Co-op Saturday morning. T.S. Giilck photo