Ontario to Reduce Neonicotinoid Use by 80 Percent to Protect Pollinators 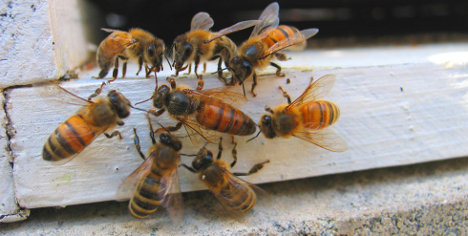 Ontario is taking action to strengthen bird, bee, butterfly and other pollinator health to ensure healthy ecosystems, a productive agricultural sector, and a strong economy.

Many factors have been thought to contribute to declines in bee populations, including Varroa mites, parasites and viruses, a poor diet consisting of mainly of corn syrup, and pesticide use.

While they have learned to deal with the mites and other factors, beekeepers and scientists are increasingly pointing the finger at pesticide use as the major cause of bee deaths.

One of the suspected pesticides, Neonicotinoids, or neonics, is a class of pesticides which were developed to deal with sap-feeding insects such as aphids, and root-feeding grubs.

Originally used only in potato fields, they have been in much wider use since 2003.

Despite there being no studies on the effects of these products on non-target insects by the agencies which regulate their use, neonicotinoids are now the most widely used pesticide in the world.

Virtually all corn, soy, wheat, and canola seed is pretreated with these products, which are manufactured by Bayer CropScience and Syngenta.

When bees forage for food in and around fields that have been planted with treated seeds, their nervous systems are attacked, and they lose their ability to fly and navigate, which prevents them from returning to the hive. They die from poisoning and exposure. Those that do make it back to the hive bring the poison with them.

Locally, apple growers are dependent on bees to pollinate their crops, but they also sometimes use neonicotinoids to control pests, so they are in a unique position to see both sides of the issue.

Johnston's own bee supplier lost thirty percent of his hives last spring, and fifty percent the prior year, though he said he hasn't as of yet experienced a dramatic increase in the cost of bringing bees to his orchard, or a decrease in their availability.

“I'm a firm believer in pollination,” Johnston offered. “I can't stress how important this is. The bees pollinate almost one hundred kinds of fruit and vegetables and if we don't have that, we have a real problem. It concerns me. I do what I can for my part.”

As an apple grower he uses neonicotinoids as part of his Integrated Pest Management (IPM) program. His orchard is monitored weekly and if there are pests he deals with them in a targeted way. Gone are the days when apple growers used pesticides according to the calendar; the IPM concept adopted by many growers is to only spray when necessary.

He said he has talked to other apple growers who have decided to stop using neonics altogether because they don't want to contribute to the loss of bees. When asked if he would wait for a ban before he would stop using them, Johnston said, “I've already kind of made that decision, that I won't be using it. We have a choice, we have other options.”

Johnston said that the loss of bees would impact his business.

“This would certainly impact me. I would have to make do with less. I would squeak by. I think it will affect the quality and quantity of the crops, bottom line. We will still have fruit, because of the fact that pollination can happen in different ways, but there will be smaller and more misshapen apples.”

Richard and Jane Elzby own Sunnyside Honey, a Meaford organic honey producer. Richard Elzby says that he has seen an increase in the number of bees he loses each year.

“My loss until 2007 when Colony Collapse started was one hive a year. This year, I lost thirty-three percent. Last year I lost twenty-five percent. The year before that it was twenty percent. Every year it gets worse,” explained Elzby. “Living in this area, we have all our crops pollinated by bees, especially our fruit crops. As long as we have the bees, we can increase the crop. If we don't have the bees, then of course the crop is going to be really lacking.”

When asked about neonicotinoids, Elzby points out that, “It's not just bees getting killed by this stuff. All the pollinators are killed by this product. It's airborne and it gets into the dust and travels. You may as well be spraying Raid into the air, it's that deadly to insects, including all of our pollinators like butterflies and hundreds of different types of pollinators people don't even think of.”

“I was an environmental engineer and a chemist for twenty-five years. What I found in the chemical industry is that there is always an alternative. So if neonicotinoids are such a damaging chemical...there needs to be pressure put on these companies to do away with them, or change the formulas. Germany and France banned them three years ago and they have seen their bees come back. Major recoveries,” said Elzby.

The European Food Safety Authority published the results of a peer-reviewed study in January 2013. The results showed higher than acceptable risks to bees. In response, the European Commission recommended a moratorium. On April 29, 2013, fifteen of twenty-seven European Union member states voted to enact a two-year ban which will take effect December 1, 2013.

Although Colony Collapse Disorder has long been thought to be the result of several factors, not anymore, says Elzby.

“As far as beekeepers are concerned, this is our opinion: it's the neonicotinoids that are doing it. The latency period for neonics is fifteen to twenty years. That's how long it takes from the time it's put in the market until they realize what the damage is. Like asbestos, and PCBs. They find out too late,” offered Elzby.

The federal Pest Management Regulatory Agency has now found a link between planting corn and soybean seeds treated with neonicotinoids — an agricultural insecticide — and bee deaths in Ontario. The province’s approach will help keep crops healthy and improve the environment by:

Ensuring a strong and healthy agricultural sector is part of the government’s economic plan for Ontario. The four part plan is building Ontario up by investing in people’s talents and skills, building new public infrastructure like roads and transit, creating a dynamic, supportive environment where business thrives, and building a secure savings plan so everyone can afford to retire.

“Our agricultural industry depends on safe, healthy lands to be productive.This is why Ontario farmers have taken significant action to reduce pesticide use, reducing overall usage by some 45 per cent in the past three decades. We know there is more that can be done, and we will work with farmers to protect the environment and grow the agricultural sector,” said Jeff Leal, Minister of Agriculture, Food and Rural Affairs.

With files from Jennifer Thompson