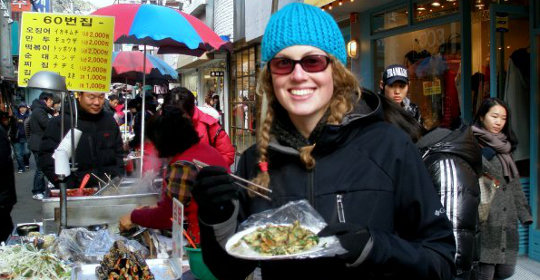 Epidemics are one those things that you never anticipate being part of, and only hear about on the news or read about in the paper.

I remember going to SARS Stock in 2003, a concert created to draw tourists back to Toronto after the tourism industry suffered from the stigma of SARS spreading throughout the city. Musicians such as The Rolling Stones, AC/DC, the Guess Who, Rush, Justin Timberlake, and more performed for over 450,000 people. At the time, I thought that was as 'close' as I would get to an epidemic scare: little did I know that six years later I would contract the new pandemic...on the other side of the world.

The H1N1 Swine Flu virus first appeared in the spring of 2009. The infectious disease affected over 74 countries, but a vaccine was quickly developed and in the summer of 2010 the World Health Organization (WHO) declared it over.

I moved to Busan, South Korea, four months after the inception of H1N1. In regards to the disease, there was no real reason to fear going there because South Korea wasn’t on the radar for cases of H1N1. Before moving, newscasters across North America mainly focused on the ongoing feud between the North and South. However, after Michael Jackson’s passing, the news was absorbed by that and concentrated solely on the legend’s life.

After two months of living in Busan, I began to plan a long weekend trip to Japan so I could visit my incredible homestay family that I had lived with a year earlier. I was teaching at a private school (known as a Hagwon in Korean) where vacation time and days off were limited, so I seized the opportunity to visit.

The classes I taught fluctuated in time depending on the day. They began in the early afternoon and went until dinner or late evening. On Wednesday before I had planned to leave for Japan, I taught from 2:00 pm until 9:00 pm. I started to feel drowsy mid-afternoon, and it progressively got worse as the day went on. My body began to feel exhausted - to the point where I had to sit down while I taught (something I never do) and used the desk in front of me as support to prevent me from falling over. I had no idea what had sparked my severe fatigue or the sudden pounding in my head, but I figured all I needed was a good night’s rest.

On Thursday, in regard to body exhaustion, I felt great! I still had head cold symptoms, but in general I felt much better. I felt normal enough that I knew I could teach, meaning that I would still be able to go to Japan for the weekend. Some of the other teachers and I finished earlier Thursday night, and four of us decided to cram into a taxi and go to Costco (Costco had recently opened its first store in Busan).

On Friday, I started off feeling OK, but as the day went on that quickly deteriorated. I slowly turned into a zombie and the symptoms I had Wednesday returned but were amplified. After class, other teachers noticed my state and suggested that I get my temperature checked by one of the secretaries. I was reluctant at first, assuming I just needed another good night’s rest and some cold medication.

When I got downstairs, Joy promptly took my temperature and then called for one of our principal’s assistants, Kai, to come to the lobby. While they spoke quickly in Korean, I continued to get worse. By the time our principal Jim appeared, I had almost passed out on the bench in the hallway. Jim came and told me that Kai would take me to the hospital in his car, and that’s when I realized I probably didn’t just have a cold.

From that moment on, my recollection is a bit hazy. I vaguely remember getting into Jim’s car with Kai, and while I had a million questions I wanted to ask, not only was staying awake a difficult task, but Kai’s English wasn’t very good, and my Korean was even worse. Instead, questions whirled around in my head: What’s happening to me? Why am I feeling this way? How did I get this or from whom did I get it? Will I still be able to go to Japan for the weekend?

When we walked into the hospital, Kai began speaking to a few nurses and I was quickly admitted to a bed (unlike most hospitals in major cities around the world). The nurse’s English ability was equivalent to Kai’s, so I still had no idea what was going on or what they were saying. Given that I didn’t have a clue what was happening, I should have been more alarmed by the situation, but I wasn’t because I felt so awful and I just wanted to lie down. After a while, one nurse motioned for me to roll over and made a charades gesture for a needle. Before I knew what was happening, I was experiencing the most sudden and excruciating pain I had ever felt.

By this point, my body was aching all over, I had a stuffy yet runny nose, and I couldn’t keep my eyes open. I remember asking Kai if it would be alright to sleep, but I don’t remember being able to stay awake for his reply.

When it was finally time to go, I was woken up and given a week’s worth of medication. Kai handed me his cellphone and Jim explained that I had H1N1 and that I wouldn’t be able to leave the country or, depending on how the medication worked, go back to work until it had been a full week from the time I began to feel sick.

The next few days all I did was sleep. Jim and his wife stopped by my apartment one day and brought me soup as well as some face masks for me to wear if I decided to go outside (there was no way I was going outside, I could barely answer the door when they dropped by). Thankfully, the vaccine and medicine worked for me, and after getting cleared by a doctor I was able to go back to teaching the following Wednesday.

The best way to describe what it was like to have H1N1 is that it was a combination of the worst flu bug and mononucleosis (mono) mixed. I’m assuming I contracted the disease from one of my students, but thankfully, none of my other students, teachers I worked with, or teachers I shared a taxi with to Costco got it from me.

Despite getting H1N1 while living in South Korea, I wouldn’t change anything about my experience travelling to a foreign country across the globe. In fact, in hindsight, the whole adventure of being admitted to a hospital because I had contracted the new pandemic while having no idea what was going on because of the language barrier, was pretty cool!