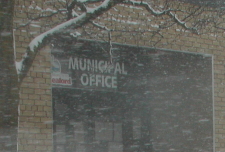 It was a year of transition for the Municipality of Meaford that brought with it new visions designed to repair old problems.

Political and financial issues aside, residents of Meaford displayed a resolve to always put community first by organizing and participating in a wide variety of events and activities.

Join The Meaford Independent in this first of a three part series for a journey through the people and stories that made 2009 a year to remember.

2009 began with news that the Municipality of Meaford had finally hired a new CAO. Frank Miele who had previously worked for the city of Vaughn brought a wealth of experience in economic development to the table. Though Miele knew that he was boarding a sinking ship, he expressed confidence that he would be able to build a team to right the ship and move toward a positive future.

And he made it clear that economic development would be a huge focus for him.

"Every community in the world has an economic development person, I’m surprised Meaford doesn’t,” said Miele at the time.

Right on cue, Meaford resident Michael Anderson came before council in late January to present the findings of the Economic Development Planning Task Force. The project had been undertaken by Anderson and a group that included Mayor Francis Richardson, Deputy Mayor Mike Traynor, David Creech, Gerry Murphy, Paul Osborn, and Barbara Kay of the 100 Mile Market.

That presentation gave birth to the Meaford Economic Development Strategy (MEDS) that would enlist some 30 Meaford residents to participate in five separate but linked task forces to explore potential avenues for stimulating economic activity within the municipality.

With a new CAO in place, and renewed energy at the municipal offices, Meaford Council and staff endured a variety of challenges throughout the month of February.

Public battles in the council chamber regarding budgets, deficits, and even the projector at Meaford Hall provided plenty of fodder for coffee shop discussions, and editorial ink.

The top priority for the municipality though was establishing a budget for 2009 while at the same time attempting to dig the town out from under the weight of a deficit from 2007 that amounted to $1.8 million.

Though there was much speculation that the 2008 year had also produced a deficit, confirmation of this would not be made public until late October when Al White of BDO Dunwoody appeared before council to advise the findings of the audit of the 2008 financial statements. At that time council and the public was informed that Meaford had experienced another deficit in 2008 of a staggering $1.2 million.

As part of the plan to move Meaford toward financial stability, CAO Miele, and volunteer financial consultant David Kennedy formulated a plan that would see municipal property taxes increased by five percent on the overall bill for five consecutive years.

Needless to say, the very large and compounding tax increases combined with the proposed 'pay as you throw' garbage bag tag program did not sit well with many residents. Councillors were faced with the delicate job of exercising financial responsibility while at the same time taking heed of taxpayer concerns, and would later in the year approve a budget that included both of the contentious proposals.

With all of the time and energy dedicated to budgets and financial issues in general throughout February and March, there was a refreshing change of pace when at the end of March the Meaford & District Chamber of Commerce held its annual Community Awards Dinner at the Meaford & St. Vincent Community Centre.

It was a time for some of the Meaford business community to be recognized for the hard work that they do, and the services that they provide to the community.

Nobody could have imagined as Adam and Jesse Reed of Reeds Restaurant stood at the podium to accept their award for Most Improved Business, that just six months later their entrepreneurial dreams would be shattered by a devastating fire in the early hours of a September morning.

Another escape from the pressures of daily life came in the form of a community play staged at Meaford Hall in the last week of March.

“Married At Last” was the second instalment in Meaford Councillor Harley Greenfield's “Henry Browngrass” series which Greenfield wrote, directed, and starred in along with an exceptional cast of local thespians that included Pam Fettes and Greg Brown.

It is said that laughter is the best medicine, which was perfectly displayed near the end of the play when it was suggested to the simple and bumbling character Fred (played by Len Metherel) that he should be on Town Council to which he replied “I'm not that stupid”.

Given the political climate in Meaford in the first quarter of 2009, it was a most fitting, and amusing bit of comedic relief.

The fun and games were short lived for many Meaford residents, and certainly for Meaford councillors, as concerned taxpayers attended a public presentation of the 2009 budget that had been approved in principle by council.

Less than pleased at the prospect of increasing taxes, and implementation of the garbage bag tag program, resident after resident approached the microphone to demand that the municipality take a serious look at staff levels, and start chopping. The topic was approached with equal parts passion and frustration, and it was clear that rural Meaford residents especially, were tired of what they viewed as continued excessive spending on the part of the Municipality.

As a result of the public pressure, Meaford council insisted that once the budget was finalized and passed, the top priority for the new CAO would be to undertake a long promised operational review in order to assess staff and service levels.

That review which would be conducted over the summer months by a combination of a citizen task force and an independent consultant, resulted in a comprehensive report to council in November that found staffing levels to be appropriate given the services provided by the municipality, and suggested that if staffing was to be reduced in order to save costs, then decisions must first be made to determine what services would also be reduced or eliminated.

The month of April closed with local schools participating in Earth Day celebrations.

At Ecole St. Vincent Euphrasia Elementary Mayor Francis Richardson stopped in to attend a school assembly, and to formally recognize a fine group of youngsters who had been participating in a school recycling program.

While presenting certificates to the students on behalf of the Municipality, Richardson talked about the importance of recognizing the contributions that youth can and do make to society.

“It is important that the youth of our community take on this leadership role. They are the generation that will have to solve the problems of recycling and reducing waste. They can provide an excellent example for the parent, and grandparent, generations to follow,” said Richardson with a smile.

After a tumultuous first four months of the year, it was amazing that they Mayor had the energy to muster a smile.

Then again, things were looking up, and in two short weeks, a budget would finally be passed, an operational review would be in the planning stages, and Federal and Provincial grant funding would begin rolling into the municipal coffers enabling the town to begin work on some long delayed and important projects.

Check back tomorrow for part two of our 2009 year in review.