As part of Mental Health Week (May 5-9) observations, students at Meaford's Georgian Bay Secondary School (GBSS) attended an assembly on May 5,  focused on an online therapy service established in the memory of Wes Cameron, a Walkerton youth who ended his own life in 2011 at the age of 16.

GBSS Athlete of the Week 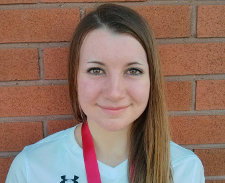 Rachel Brown finished second in the competitive girl's singles badminton division at the north regionals and then met her nemesis again at the Bluewater Championships.

This time she turned the tables and won the final match to finish first place overall in Bluewater badminton.

Earlier this month, students in the French program at Georgian Bay Secondary School (GBSS) organized and arranged a fully functional French Film Festival for a large group of local students.

The event, touted as the “First annual French Film Festival”, was truly unique, featuring the showing of two acclaimed French films, as well as a realistic French cafe, and the opportunity to walk the red carpet. It even included a string quartet, and the chance to win an iPod Touch.