The Big Apple Stays Where It Is 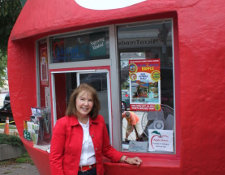 The Big Apple, located in the heart of Meaford’s downtown shopping area, has been the subject of much speculation over the past several months.

Council voted on December 9, 2013, to move Welcome Centre services in-house, no longer to be the responsibility of the Chamber of Commerce. Since 1974, the Chamber-owned Big Apple structure has been a highly visible icon in Meaford. Its future became a concern for many in the community when the Chamber announced that it would have to sell the Apple.

Thinking of Being a Contestant in this Year’s Dragons’ Den?

Last year’s Dragons' Den Meaford winner Paul Bishop of Ride On Bikes has some advice for you as he shares his story and experiences participating in Dragons’ Den Meaford.

Aged Apple with a Fresh Taste 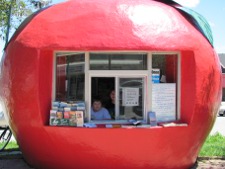 The iconic Big Apple located in the core of Meaford has been the topic of many discussions over the past several months after a For Sale sign was mounted on the structure in January.

The Meaford Chamber of Commerce received an overwhelming response from the community, clearly stating a strong desire to keep the Apple open and in its current location.

If you've had a mid-day hankering for a hot dog, but have been wondering where the popular Meaford Top Dogs hot dog stand has moved, you just need to take a walk along the bay to Fred Raper's Park.