Need Someone to Gopher a Soda? 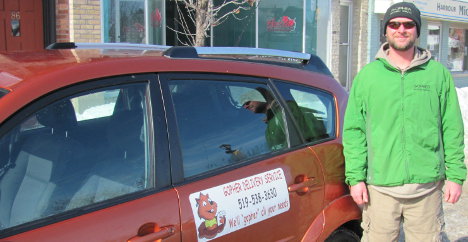 A battered back from years of working in the flooring industry caused Meaford resident Jason Green to look for another way to support his family. While delivering pizza part-time during his transition, Green had an idea.

“Originally I did hardwood flooring but then had a back injury, so I was looking for other employment and I started delivering pizza, and I realized that there is more that could be delivered in this town than just pizza. Then my wife came up with the idea to apply for the liquor licence, and we connected with local restaurants, and it grew from there,” explained Green.

As a result, in October of 2011, the Gopher delivery service was born. The concept is simple. A customer calls and asks for a pick-up at a restaurant or store, the Gopher makes the pick-up and pays for the items, a small service fee is added, and the customer pays at their door with cash or debit.

A significant portion of the delivery requests received by Green are for beer or liquor store runs – a service that can help keep those already under the influence safe at home and off the roads. But it's also useful for the elderly and disabled who may not be able to venture out into harsh weather conditions to pick up some groceries, or by families who would like dinner delivered on a Friday night, but would prefer Chinese food or burgers rather than pizza.

“It's grown immensely over the last three years,” Green told The Independent. “It's about 50/50 between alcohol and food deliveries, and I do the odd grocery shopping as well.” Green says he tries to keep grocery pick-up and delivery to small orders of ten items or less, but a quick run to the grocery store for a few items on a stormy day can make a world of difference for a customer with difficulty getting around.

Green notes however that while it might be assumed that the elderly make up much of his customer base, they are only now beginning to discover the Gopher service. As more and more Meaford residents discover the Gopher, Green sees a bright future for his business.

“It's gotten so busy over the last three years, I can only see it growing,” said Green, who has taken on a part-time driver, which helps Green catch his breath from his typical seven-day work week.

Green's days are spent making runs from one location to another, from one restaurant or store to another, and he says he finds his business to be rewarding in many ways but the greatest rewards are the people he meets.

“The greatest reward is making people happy. I meet people that say, 'Why would I have a husband when I have you to do the running around for me',” Green says with a laugh. “And so many people say to me, 'You have no idea how much easier you make my life', and that makes you feel great.”