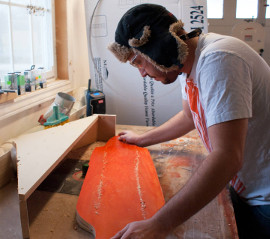 In 2012 Alistair McCall, with his company AM Wood Skateboards, won second place in Meaford’s Dragons’ Den. At that time, he was already recognized internationally as a manufacturer of longboards and he was looking for help to expand.

His process used wood, hemp, and basalt fiber as basic materials, a more planet-friendly approach than fiberglass and carbon fiber. One of the Dragons, Jan Singbeil, ordered one on the spot as a Christmas gift and was quoted in the Blue Mountains Courier-Herald as saying, "Your product is exciting, and beautifully made. The boards are truly a work of art."

It had started five years earlier as a hobby, making boards for himself and his friends, zipping down the long hill on Grey Road 119 in the Blue Mountains until they passed a law banning skateboards on the roads. By then Alistair was selling in ten countries over the internet.

“I had been in business for two or three years then,” he says, “It was not so much the monetary rewards or the ‘in kind’ as it was the process of process of going through it all that I found most valuable. It was that chance to talk to knowledgeable people who helped me put things in perspective and get all my ducks in a row. It’s part of my permanent toolbox now, everything I got from that business as well as from the Den.”

When the market for longboards dropped and the sport had fewer followers, Alistair liquidated his assets. He wasn’t entirely surprised. In 2013 he had recognized that the sport was on an upswing but he knew it would be cyclical.

“It comes back every ten years or so and everybody gets really excited,” he had told Roger Klein at CTV. “Then it dies back and picks up again. Right now we are on an upswing.” Since then, the downswing has arrived as he knew it would.

“It’s about a ten-year cycle as far as I can tell, for the past sixty years,” he says today, “It’ll be coming up in a few more years and hopefully I’m in a position where I can capitalize on that. I’ve got everything that I would need to start up again and it’s just a matter of having a market that will support it.

“Right now anybody that’s producing anything is bottom of the barrel, having everything shipped in from China. It’s just a mass-produced jellybean kind of game at the moment.”

“A lot of people have exited the sport,” he said. “There is still a core group of people that are out there doing it but it’s not five out of ten kids on the block skateboarding anymore.

“When I started my business, kids born around 2000 were just becoming teenagers, and now they’re all in their early twenties and don’t have time for such things. So I hope that there will be a new batch coming up pretty soon.”

Until that new batch arrives, Alistair is helping out on the family farm, which is in heritage poultry production. Along with chickens, turkeys, and guinea fowl the farm raises heritage sheep as well. He says that some of the marketing skills he picked up with AM Wood Skateboards can come into play with the family business. In addition to serving the high-end restaurants in Toronto with their heritage meats, he said, “We are interested in tapping into the kosher and halal market with the sheep, because that demographic is always growing in Canada.”

He says his mother “has actually been very instrumental in bringing back some of these breeds that were completely abandoned by commercial growers, the kind of turkey that your grandmother would have put on the table.”

With the challenges of marketing specialized agricultural products, though a far cry from hemp-based skateboards, the lessons learned at Dragons Den still resonate. His advice to anyone entering this year’s contest would be simply, “Do it!”

“I’ve talked to several people,” he said, “who tell me, ‘Oh, I don’t know if my idea’s good enough. It’s just a silly idea I have. I don’t want to stand up in front of a lot of people and have my work critiqued.’

“Well, guess what, that’s what business is. It’s putting yourself out there and doing it.”

He admits to having some business ideas that he may venture into in the next twelve months and he can use the skills gained from Dragons Den “to drill down what I need to do, and when.”

With its Meaford Hall show on November 7, the renamed Meaford Dragons is celebrating its tenth year. As Alistair pointed out, the process of creating a business plan and presenting it makes every entrant a winner. Interaction with the Dragons, all local business successes (including former winners), results in a windfall of great advice, and often the beginning of long-term relationships that continue to provide benefits for years to come.