Every Day is Women's Day For Meaford Businesses 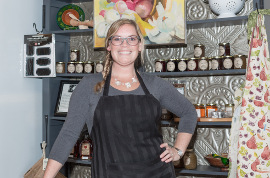 Megan Robertson was as surprised as others when she read a recent posting on Facebook listing all of the businesses in Meaford’s downtown core owned and operated by women, what she estimates to be a strong 85 percent.

Then again, she wasn’t overly surprised. As owner of The Kitchen on Sykes Street and the recently elected president of the Meaford BIA, Megan is first in line to recognize the unique qualities that women bring to the business sector, whether in the retail, professional services, or the food sector.

Thursday, March 8, is International Women’s Day, the day that women’s issues and contributions to society are celebrated internationally. Megan toasts businesswomen by saying, “Women are determined, open-minded, and have a keen attention to detail. They are nurturing not only toward family, but also toward their businesses, their employees, and toward the community that supports them.”

“Businesswomen in Meaford feel empowered,” she says. “Meaford’s business community itself is empowering. There are women who have been in business for a long time who have made an impact. They have obviously pulled their own weight in the work world, making ends meet, and making a success of their businesses. They are a good influence.”

Megan is a strong believer in community, of staying put in a community for the long-term, of contributing to the community’s well-being, and, if the right fit when it comes to work doesn’t materialize, then she believes in making a job for oneself. As a high school student, she worked part-time for Christine Collins, the former owner of The Kitchen. She benefited from working alongside a successful businesswoman like Christine as a role model, and learning as she went along. She left Meaford for her post-secondary education, returned to Meaford, resumed part-time work with Christine, and took over the business last June. Now, Megan’s young daughter is benefiting from seeing a strong woman in action. “Everything fell into place,” she says.

The theme of the 2018 International Women’s Day is Press For Progress, the emphasis being gender parity. “For the most part, I have not experienced any gender discrimination,” Megan says, “but I wonder if businessmen in Meaford know just how many downtown businesses are owned and run by women.”

Photo: Megan Robertson, owner of The Kitchen on Sykes Street in Meaford, salutes her fellow businesswomen during International Women’s Day on March 8, women who by their example have empowered new businesswomen like herself. Megan assumed ownership of The Kitchen from Christine Collins in June and presidency of the Meaford Business Improvement Area (BIA) from Dave Glass in January.