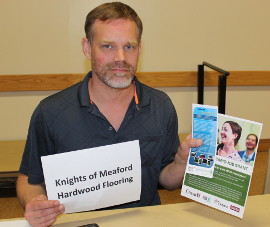 It's becoming a tougher economy in Meaford, with businesses struggling to recruit the workers they need.

That's why the Meaford Chamber of Commerce and the Municipality of Meaford teamed up to sponsor a job fair on April 22 at the Meaford and St. Vincent Community Centre.

Shirley Keavaney, the owner of Dairy Queen and a council member, said the job fair idea sparked her imagination after she found herself struggling to recruit workers for her fast-food business.

She soon found out she wasn't the only business owner facing that problem, and the discussion continued from there to holding the job fair.

"It's going very well," she said. "And there's a huge message there. We've all heard for years and years that there are no jobs in Meaford. Well, this tells us that there are, and they're not just all restaurant jobs. There's a variety of opportunities."

She said if a company came in to town that needed 40-50 staff or workers, there just aren't those numbers of available people here, and that's a concern.

Larger operations such as the new Foodland store in Thornbury and Blue Mountain Resort have siphoned off a large percentage of workers, she said, and that's difficult to compete with.

Six thousand people moved out of Grey County last year alone, Keaveney added, and that loss is an unsustainable number.

"I think we need to focus on keeping on our people here," she said. "There's a huge migration out of Grey County, and that's a scary figure. It's a much bigger discussion than what's happening here today."

Representatives from YMCA Employment Services in Owen Sound were also invited to attend to provide more resources for job seekers.

Warren Munroe, a job developer with the organization, said he had no ready answers for the peculiarities of the current job market in Meaford, with many people looking for work while employers scrambling to find workers.

"There's a lot of people out of work," Munroe said. "But it seems to be the smaller employers right now that are having trouble filling their needs."

Many of the larger employers, such as the local grocery stores, didn't attend the job fair, he said, because they're having little difficulty recruiting workers.

"I can't answer it (otherwise)," he added. "I don't really have an answer as to why these positions are there."

He noted that several fast food businesses, such as Dairy Queen, do tend to have a larger staff turnover than average.

Chapman's Ice Cream was one of the largest employers to set up a booth. This is the beginning of their busy summer season, and the company is aggressively looking for more employers, said Tammy Martin, who works in the human resources department.

The company is growing, and "sales are up" she said, and that means more workers, hence all of the efforts to recruit more people.

Most of those jobs are seasonal at the moment, Martin said, and students are a prime target.