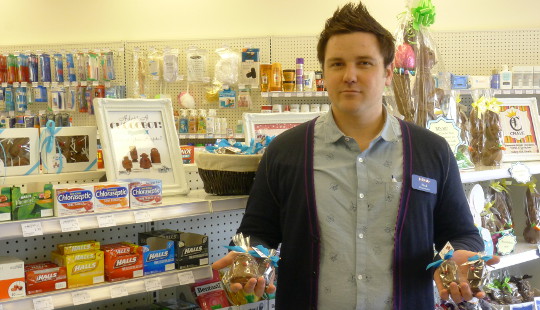 The owners of Meaford's new IDA pharmacy have wasted no time in giving back to the community with a fundraiser for the Meaford Hospital Foundation.

The pharmacy has been selling chocolate treats called 'Choco-bots' since they opened in December with one dollar from each sale going to the Meaford Hospital Foundation.

“We wanted to do something to help out the community as soon as we opened. We opened December 18. Of course being a new start-up, we aren't in the position to start cutting big novelty cheques, but at the same time, both myself and Tundra Lee, my business partner – we're both former hospital pharmacists, we both know the services that Hospital Foundations provide, so we came up with the idea,” pharmacist and co-owner Rick Lorenz told The Independent.

Lorenz and Lee met while working as pharmacists at the Collingwood General and Marine Hospital. 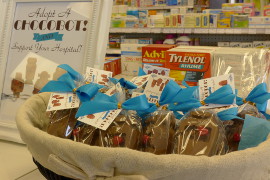 At just $3.49, the Choco-bots have been a popular item at the new pharmacy, and Lorenz said that he is hoping their initiative can raise approximately $1,000 for the foundation.

The pharmacy has added some extra fun to the Choco-bot initiative with a photo contest. Those who have purchased a Choco-bot can submit photos via social media websites Facebook or Twitter of their Choco-bot doing something fun for a chance to win a giant 10 pound chocolate Easter Bunny. Both the Choco-bots and the chocolate bunny are made by Crave Chocolatier.

The contest, which has been running since December, will wrap up with the big draw for Easter.

Lorenz said that he and Lee look forward to presenting a cheque to the foundation shortly after Easter.

Business has been building at the new pharmacy, and Lorenz said he has enjoyed meeting their new customers.

“It's been excellent. People have been really welcoming, we've had a lot of interest, a lot of new patients transferring their prescriptions to us, in some cases because we are closer to where they live, in others it's because they knew either Tundra or me from the Collingwood hospital. The town is making us feel very welcome,” offered Lorenz.

The Meaford Hospital Foundation was established to raise, receive, and manage money for the purpose of purchasing capital equipment and building improvements at the Meaford Hospital. This funding role has been critical to the hospital's viability since the government provides relatively few funds for capital purchases.

Over the past six years the Foundation has contributed between $300,000 and $400,000 per year to the Hospital for medical equipment.