Chamber of Commerce Carries On Under New President 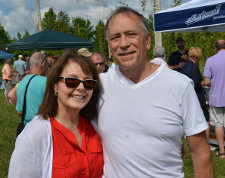 At the August Board Meeting of the Meaford Chamber of Commerce, the baton was passed from outgoing President Shirley Keaveney to Dan White, MBA.

A resident of Meaford for more than twenty-five years, Dan White is a financial advisor, a member of the Meaford Kinsmen Club and has served for the past few years as treasurer of the Chamber.

Although she will continue on the board as past president, Shirley Keaveney, owner/manager of Meaford’s Dairy Queen, has her sights set on a new career, running as a candidate for council in the upcoming municipal election. Dan thanked Shirley for helping smooth the transition, having seen the Chamber through some difficult times. She will stay on as chairperson of the Meaford Dragons’ Den and of the Annual Chamber Awards Dinner and Presentation, both significant initiatives created by the Chamber.

The Chamber says that Keaveney’s stint as President of the Chamber included both triumphs and challenges. A high point was the initiation in 2011 of celebrating Canada Day in a big way, which she initially conceived and then shepherded through three years. The event grew more successful with each year, bringing hundreds of visitors, locals and tourists, to the harbour, and involving the entire community of businesses and volunteers. A setback happened earlier this year when the town council suddenly cancelled the Welcome Centre contract which had been a fundamental source of funds for the Chamber, putting its future in jeopardy. The subsequent uncertainty and uproar over the future of the Big Apple was finally settled with the decision to keep the apple as a Business Information Centre. Keaveney’s leadership and the support of the community were instrumental in pulling through the crisis. With a new manager and a Trillium Grant to determine the feasibility of a Business Support Centre here in Meaford, the Chamber regained its balance and is able to continue with a new focus on business support.

A priority for White, in addition to continuing the After Five networking sessions and informational breakfasts, is to expand on the information recently gleaned from a Business Outreach project undertaken by the Chamber. Pleased with the quality of suggestions from twenty-three local businesses acquired through individual interviews with the Outreach team, he plans to use the information as the basis for determining how best to improve on services provided to members and local businesses. Beyond that, he will make a point of visiting as many businesses as he can during his tenure to give people the opportunity to be heard.

Recently under Keaveney’s leadership, the Chamber has undertaken more of an advocacy role, specifically taking positions on things like the Harbour Concept Plans and the Policing issue. If elected to council, she will continue to be active in these issues from her new vantage point, while incoming Chamber President White will focus on business development.

In the meantime, the Chamber continues to be an important part of the community. White values the concept of continuity and has stated he will try to live up to the standards set by past presidents as the Chamber builds towards the future.