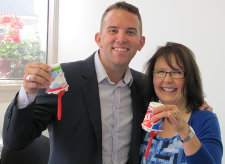 When Dairy Queen customers purchase a Blizzard, the server holds the cup upside down to show how thick the ice cream creation is. When a child becomes ill with a serious condition, the lives of a whole family can be turned upside down, though it can be much tougher to hold everything together.

The annual Miracle Treat Day is aimed at helping kids and their families recover from illness. Dairy Queen locations across Canada will be hosting the annual event on Thursday August 14, and Meaford's Dairy Queen will once again participate.

On that day, all proceeds from every Blizzard treat bought at Dairy Queen will be donated to local Children's Miracle Network Hospitals to help children in need.

The Children's Miracle Network raises funds for 170 children's hospitals, 14 of which are in Canada. Hospitals use the money where it's needed the most. When a donation is given, it stays in the community, ensuring that every dollar is helping local children. Since 1984, Dairy Queen has raised more than $3.3-million for Sick Kids Hospital. Dairy Queen has been fundraising collaboratively with Children’s Miracle Network for 30 years, raising $100-million for its member hospitals.

Shirley Keaveney, owner of Meaford's Dairy Queen, visited the Meaford Independent office last week with Aaron Sanderson of the Sick Kids Foundation, and some Blizzard treats to raise awareness about the upcoming event. Keaveney told the Independent that the Miracle Treat Day is one of the most important days of the year for Dairy Queen outlets, and she hopes Meaford residents will once again stop by on August 14 to enjoy a Blizzard, and help support Children's Miracle Network.